Its bubbly-bop vibe will definitely catch your attention! Kim Yohan teases fans with a point choreography of his upcoming solo track entitled ‘No More’ with a video uploaded on YouTube on August 22nd.

The bubbly-bop track is revealed to be produced by Zion. T, and will show Yohan’s charming side. On August 20th, the rising idol released the first teaser for his upcoming MV.

He also gave fans a rather shocking spoiler when the track’s lyrics was revealed through their official Twitter account. 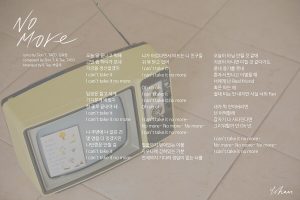 The lyrics tells about waiting for someone’s reply and how he can’t take the pressure anymore. Yohan himself participated in writing the lyrics.

The digital song is expected to be released this August 25th at 6 PM KST. This will mark the continuation of Yohan’s idol career together with the upcoming debut of their group, ‘Wei’. -Hallyulife.com